He talks a big game

“I was sitting on my couch when I saw Kaunda Ntunja on TV, telling me to audition for the SuperSport Rugby Challenge Commentator Search. So, I did,” says Paul Stubbs, winner of the English competition. Paul’s love of rugby started at six years old when he returned to South Africa with his parents – whose marriage had been illegal under the apartheid regime – just after Nelson Mandela’s release from prison. He played the sport from sub A (grade 1), but stopped when he matriculated. Paul went on to study English, then became a rapper for an independent record label for a few years before that fateful day on his couch. “Having worked with my voice and being a little obsessed with watching rugby, I felt I had the perfect skill set to apply.” 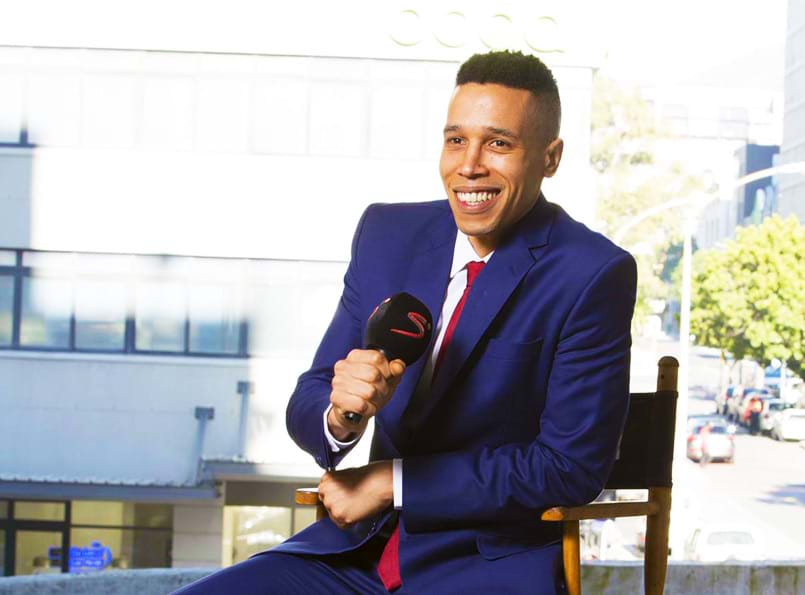 They give you advice on how to improve from game to game – it’s a continuous learning process. It’s great to see I’m just one of many young people being trained on the job

So Paul got off the couch and headed to Newlands Rugby Stadium for the auditions. He and his fellow finalists were put through their paces at inaugural SuperSport Rugby Challenge matches. “When they told me I was the winner, I actually did a happy dance!” says Paul. He remembers his first live gig, partnered with seasoned pro Gcobani Bobo: “I was freaking out – it was going be live! I smiled through the whole game; Gcobani was the perfect partner.” Paul has also learned from the likes of Gavin Cowley and Hugh Bladen and has been a part of tournaments like the Varsity Cup and the PRO 14. “It’s been the most exciting challenge of my lifetime.”

CLOSING CREDITS | A PIECE OF THE SET

“It’s great to work in a big crew, with such incredible people,” Paul says about spending most weekends at rugby matches around the country as a regular rugby commentator for SuperSport. He, and the other five winners, continue to get support from SuperSport’s experienced commentators, directors and on-air talent coach Malcolm Russell. “They give you advice on how to improve from game to game – it’s a continuous learning process. It’s great to see I’m just one of many young people being trained on the job.” Paul believes the SuperSport Rugby Challenge will make a positive impact for years to come, giving hopefuls a chance to see themselves on TV, supporting their heroes on the field and inspiring their communities. “I feel honoured to be part of it. It makes me proud of this company and my country.”

I feel honoured to be part of it. It makes me proud of this company and my country