MultiChoice Group and its partners use cookies to help deliver services and for advertising purposes (see details in Privacy Policy ) By using this site you agree to this. You can change your cookie settings in your browser.
Graduation Ceremony for MTF’s 1st Batch of Academy Students!
Media: 29 August 2019 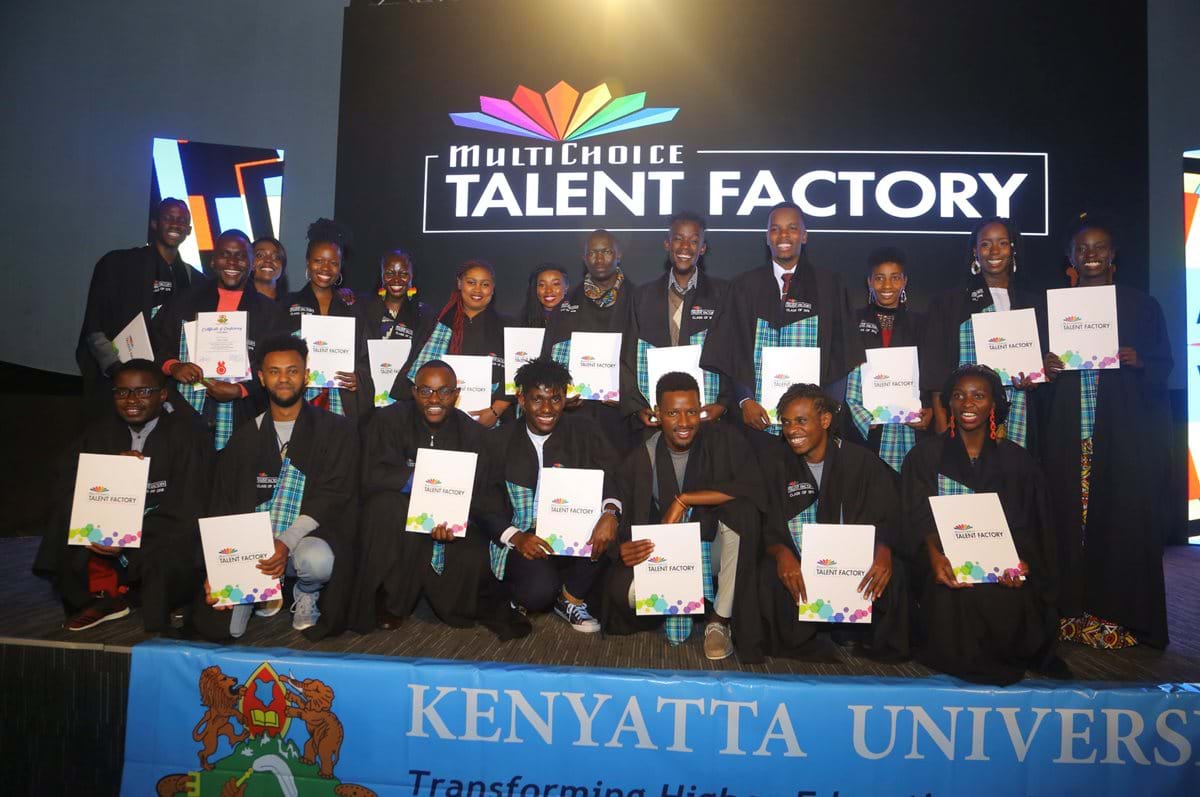 MultiChoice Africa is proud to announce the Class of 2018 have graduated! After a gruelling 12-months of honing and sharpening their various skills within film and TV, MultiChoice Talent Factory (MTF) celebrated the Academy students of the East Africa hub at its first graduation ceremony held at the Nairobi Film Centre where students received their certificates from the Kenyatta University accredited training programme.

This particular graduation is a landmark moment for MultiChoice Africa’s shared-value initiative, MTF, as its inaugural year proved to be a success with the 20 students accepting their MTF certificates of completion in front of their family, friends and creative industry peers. Some of the guests included Hon. Joe Mucheru, EGH Cabinet Secretary, Ministry of Information & Communications who was our chief guest, Dr Ezekiel Mutua, MBS CEO, Kenya Film Classification Board and other dignitaries from across the East Africa Region.

“We’ve encountered some challenges as we travelled our way along this journey, but with the remarkable support of our stakeholders starting with the Cabinet Secretary Joe Mucheru who personally officiated the opening of the inaugural academy last year, our partners and supporters, we soldiered on and have emerged stronger for the creative industry as a whole,” said Maharage Chande, Northern Regional Director: MultiChoice Africa.

Launched in May 2018 to ignite Africa’s creative film and TV industries through training and skills development, the MTF Academy is a 12-month fully funded training programme aimed at upskilling the next generation of passionate young film creatives. As the first touchpoint of the shared-value initiative, the MTF Academy’s curriculum is expertly executed under the guidance of regional Academy Directors Njoki Muhoho (East Africa hub), Berry Lwando (Southern Africa hub) and Femi Odugbemi (West Africa hub).

The 4-week student selection process was tough, with the Academy Directors having to sit on interview panels in the 13 countries to choose 60 students (20 for each hub) from a pool of over 3,000 applicants. Those that made the cut have certainly proved their potential, and all the graduates’ hard work during the programme has led to this moment, said the East Africa hub’s MTF Academy Director, Njoki Muhoho.

“Our first MTF graduation ceremony was a momentous occasion. It is the culmination of all the students’ teachings, and to celebrate the fruits of months of work.It was truly a privilege to witness as the students worked diligently and demonstrated exactly how important a programme such as the MTF Academy is for the preservation of Africa’s creative film and TV industry. I couldn’t have been prouder of the students for the work they have so far put in, and for what lies ahead of them,” said Muhoho.

Throughout the year, MultiChoice Talent Factory has partnered with various institutions and organisations to ensure the success of the initiative. The partners have delivered expertise in various aspects of the film and television and participated in various touchpoints of the initiatives from training at the Academy to upskilling industry professionals through MTF Masterclasses and the MTF portal – www.multichoicetalentfactory.com. Furthermore, the partners have also contributed to the initiative by offering exciting rewards for various graduates of the MTF as part of igniting Africa’s creative industries.

In April 2018, the MTF initiative partnered with the world-renowned New York Film Academy College of Visual & Performing Arts (NYFA). Every year, starting with this first cohort, this leading-edge partnership will select one high-performing graduate from each of the three hubs and give them an opportunity to enhance their skills through a scholarship. The East Africa Class of 2018’s recipient is 26-year-old Kenyan Hillary Lanogwa, who alongside being multi-skilled, also displayed a great sense of leadership and team work during the programme.

In addition to the NYFA partnership, the MTF also partnered with global consulting and solutions integration company Nihilent Limited to provide a 2-week Bollywood production internship for one student from each hub upon graduation. The East Africa Class of 2018’s recipient is 26-year-old Jane Moshi from Tanzania.

The Africa Magic channels are a platform for compelling stories that speak to the African heart and the 3-4-week scriptwriting internship on an Africa Magic Series will equip 24-year-old Cissy Nalumansi from Uganda with the necessary skills to tell authentic African stories.

In addition to these scholarships, continued support from the Henley Business School and Dolby are just a few of the many benefits that the Class of 2019 will also gain from when they begin their programme in October this year.

Jasco Broadcast Solutions is also on board the MTF Academy journey. As part of their partnership with the shared-value initiative, Jasco will provide one AVID media composer licence (in perpetuity) for the most-promising film video editor per region and the software license went to 22-year-old Kenyan Hilary Sibuni Sitati. The AVID Pro Tools license (in perpetuity) and dongle for the most-promising sound engineer per region was awarded to 24-year-old Anthony Njoroge from Kenya.

“From the onset, we as MultiChoice believed that working in partnership with creative organisations across the continent and beyond will contribute towards making this initiative a success for the students and broader creative industry,” says MultiChoice MTF Director, Cheryl Uys-Allie. “We truly thank the partners who have come on board to contribute towards equipping our emerging creatives with the technical skills they need to expertly navigate our industry. As the old African proverb says, ‘If you want to run fast, go alone. If you want to run far, go together. It’s our hope that we will see more partners joining us to ignite Africa’s creative industry further.”

Congratulations Class of 2018 who are now alumni of the exceptional MTF Academy programme. We couldn’t have been any prouder!